After 1,600 km transport on numerous water routes and passing through 68 locks – in the prescence of Federal Minister of Transport Andreas Scheuer – the steel structure of Europacity bridge, that was carried out by STREICHER Maschinenbau GmbH & Co. KG, was swiveled and installed successfully into the end position over the Berlin-Spandauer-Schifffahrtskanal by STREICHER Tief- und Ingenieurbau Jena GmbH & Co. KG. 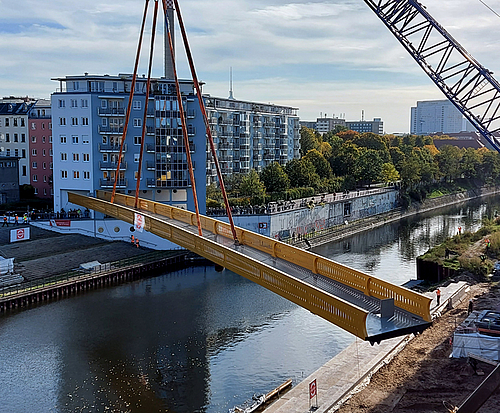 A 800 t crawler crane put the 190 t steel structure on two abutments, that had been carried out by STREICHER Tief- und Ingenieurbau Jena. Subsequently the steel structure was fitted in exactly. Now at both ends a joint construction to the road will be executed. Finally STREICHER will provide the handrail of the bridge with LED lights. Thus the building structure will also shine golden at night.

The bridge is decorated with ornaments and is named after the former prime minister of Israel, Golda Meir. It was designed by the architectural office ACME. From spring next year the bridge will be passable.