Displacement of top structure of Fahlenberg bridge on Gosener canal

In cooperation with subcontractors STREICHER Tief- und Ingenieurbau Jena GmbH & Co. KG carried out this project in the south-east of Berlin 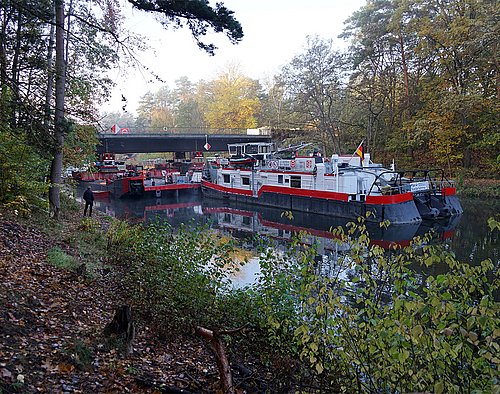 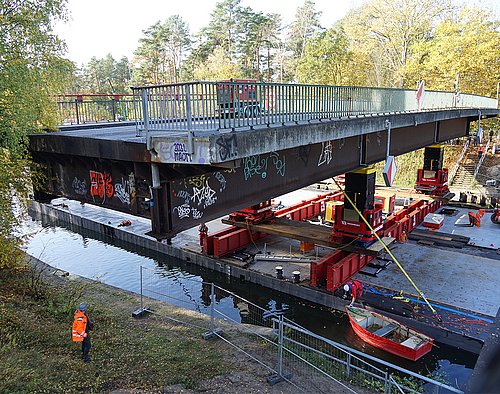 After difficult preliminary works the real displacement of the bridge’s top structure with a total weight of about 620 t over the Gosener canal could start on 26th October. Two longitudinal linked pontoons were installed under the Fahrenberg bridge and carried the hydraulic unit. By means of its four hydraulic hoists the structure was lifted off the abutments vertically. One barge each at the north and the south end of the unit pushed and pulled the freefloating bridge to its new position. About 100 m south the bridge reached its final position in the afternoon of the same day. During the new construction period the structure serves as replacement bridge of the bypass road. Within the following two days the bridge was installed on the banks. Now STREICHER Jena is responsible for carrying out the complete demolition as well as the construction of the new Fahlenberg bridge at the previous place.
The old bridge, which again fullfils a valuable purpose within the following weeks and months, will be finally removed and recycled afterwards. The displacement was associated with large-scale detours and attracted a lot of onlookers.

The Fahrenberg bridge is located in Berlin’s district Treptow-Köpenick and crosses the Gosener canal via the Gosener road. The road functions as direct connection of the Köpenick district Müggelheim and Gosen-Neu Zittau. The current bridge has been carried out as single-span steel bridge in 1983.