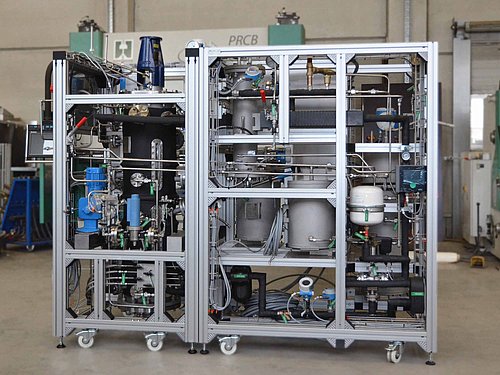 The visionary project deals with energy generation through power-to-gas and aims to produce methane gas through the use of special microorganisms.

In order to continuously develop the technology, Electrochaea conducts intensive research and for this purpose a laboratory system, called “KittyCat”, operates at the company headquarters in Planegg near Munich.

As part of the KittyCat project, STREICHER provided significant support in the safety review and the installation of the system. The majority of the system was manufactured in the production halls in Niederwinkling and Deggenau and then assembled on site. In addition to MAX STREICHER Anlagentechnik, which took care of the planning and the mechanical assembly of the system, STREICHER Maschinenbau took on the construction of the necessary containers made of duplex steel. In addition, the department of electrical and automation technology participated in the planning and implementation of the EI&C technology (measurement, control and regulation technology). The interaction of the individual areas was very successful  ̶ the system is already being used by the customer.